The Confiserie Josef Holzermayr in Salzburg

In homage to the musical genius of the city of Salzburg, Josef Holzermayr, from 1890, had hand-rolled the Real Salzburg Mozart Ball in small numbers and offered it in silver stanniol. Since 1913, they have also been available in the original shop, the Confiserie, which is based on the Alte Markt. In the meantime, it is being sent around the globe as an exclusive present.

The Holzermayr is an Eldorado for chocolate lovers. The offer ranges from stuffed chocolate to raisins encroached in grappa. The company is owned by the family in the fourth generation, whoever enters the chocolate and confectionery business knows immediately that this is a passion. Chocolates and chocolates always come fresh from production.

The history of today’s world-famous company began in Salzburg in 1865. During this time, the eldest son of the family, Josef Holzermayr, worked as a journeyman in the Lippschen Lebzelter- und Wachszieher workshop, in one of the three small shops of the Grandeggersche Haus. Apparently the city seemed too narrow for the young Joseph and after his journeyman and hiking years he acquired an estate in Werfen, with the lebzelter and pastry trade radiated on it.

From now on, the hard-working businessman was represented at all church festivities and farmers’ markets with his delicious confectionery specialities. Soon after, Holzermayr was declared a personal k. u. k. court supplier to his Highness by Archduke Franz Ferdinand. With an ordinary hand wheelbarrow, loaded with all kinds of delicacies, we went along the cart paths stracks up to the castle Hohen Werfen.

“Chocolate to enjoy” – true to this company philosophy, Josef Holzermayr opened a small shop at Alte Markt 7 in the city of Salzburg in 1913, which was taken over by his son Rudolf in the same year. At that time, cocoa and cake were also served as a rarity with the speciality “Real Salzburg MozartKugel” (Real Salzburg Mozart Kugel), which was hand-turned in small numbers. The core of this small delicacy is made of the finest nougat and is encased in pistachio marzipan and bitter chocolate. In order to ensure a better durability, the Salzburg specialty was wrapped in the tried and tested Holzermayr – Silberstanniol, then as now. 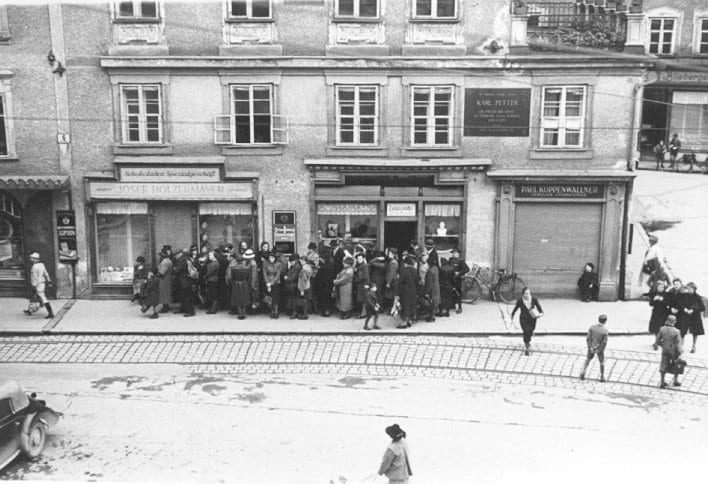